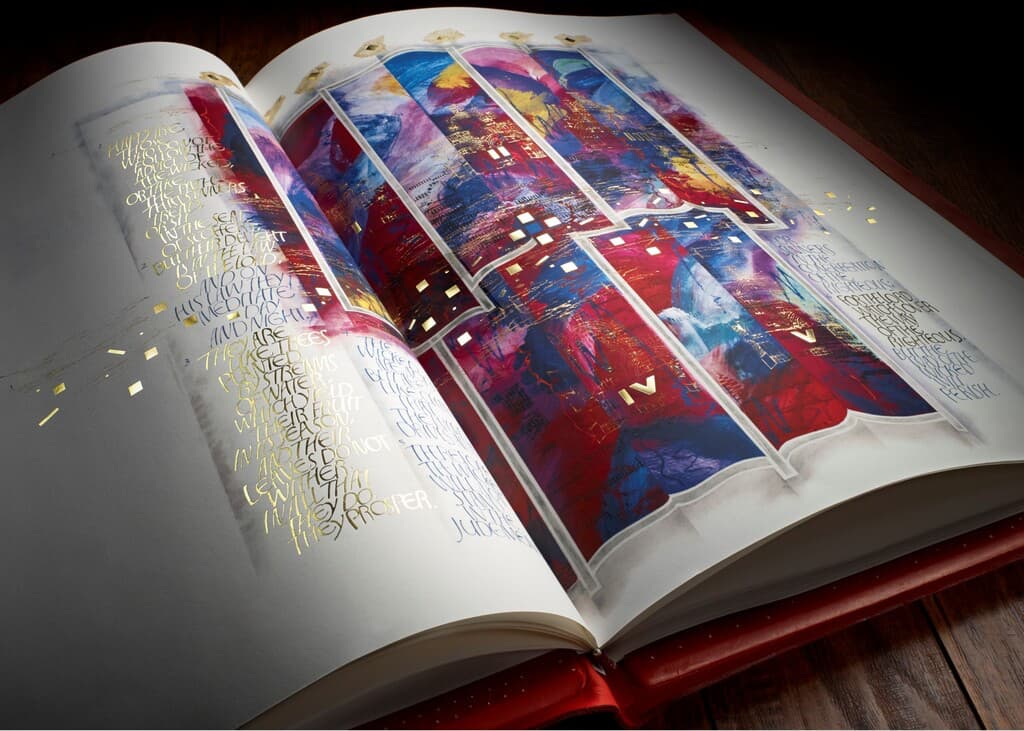 The seven volumes of the Heritage Edition are located in the Allison Library Rare Books Room, with one volume always on display in the library foyer. Though it is a rare and valuable work of art, The Heritage Edition is also meant to be read and studied. All Regent students and visting scholars can view The Bible up close and personal by making an appointment, see the left tab "Book A Session With The Saint John's Bible."

Illuminating the Word of God For A New Millennium

The Saint John’s Bible is a work of art and a work of theology. This contemporary Bible was created by a group of 23 scribes, artists and assistants in a Scriptorium in Wales under the artistic direction of Donald Jackson, Senior Scribe to Her Majesty Queen Elizabeth’s Crown Office at the House of Lords. The team worked in conjunction with a committee of theologians, scholars and artists from Saint John’s Abbey and University in Collegeville, Minnesota. This collaboration brought together the ancient techniques of calligraphy and illumination with an ecumenical Christian approach to the Bible rooted in Benedictine spirituality. The result is a living document and a monumental achievement. All 73 books from the Old and New Testaments (including Apocrypha) using the New Revised Standard Version are presented in seven volumes of approximately 1,150 pages. After fifteen years of work, the pages were completed in 2011 and given a permanent home in The Hill Museum & Manuscript Library (HMML), located on Saint John’s University campus, Minneapolis.

The Saint John’s Bible incorporates many of the characteristics of its medieval predecessors: it was written on vellum using quills pens fashioned from feathers, natural handmade inks, hand ground pigments and gild such as gold leaf, silver leaf and platinum. Yet, it employs a modern, English translation as well as contemporary scripts and illuminations.

The goal of The Saint John’s Bible is to ignite the spiritual imagination of all peoples throughout the world by commissioning a work of art that illuminates the Word of God for a new millennium in a way that is relevant to the 21st century. It is a prophetic witness to the Word of God in our day and beyond, an opportunity for learning and scholarship and a dignified expression of the Benedictine vision: "That in all things God may be glorified.”

The Saint John’s Bible  has over 160 illuminations, many in gold leaf, and numerous special text treatments filling its 1,100+ pages. 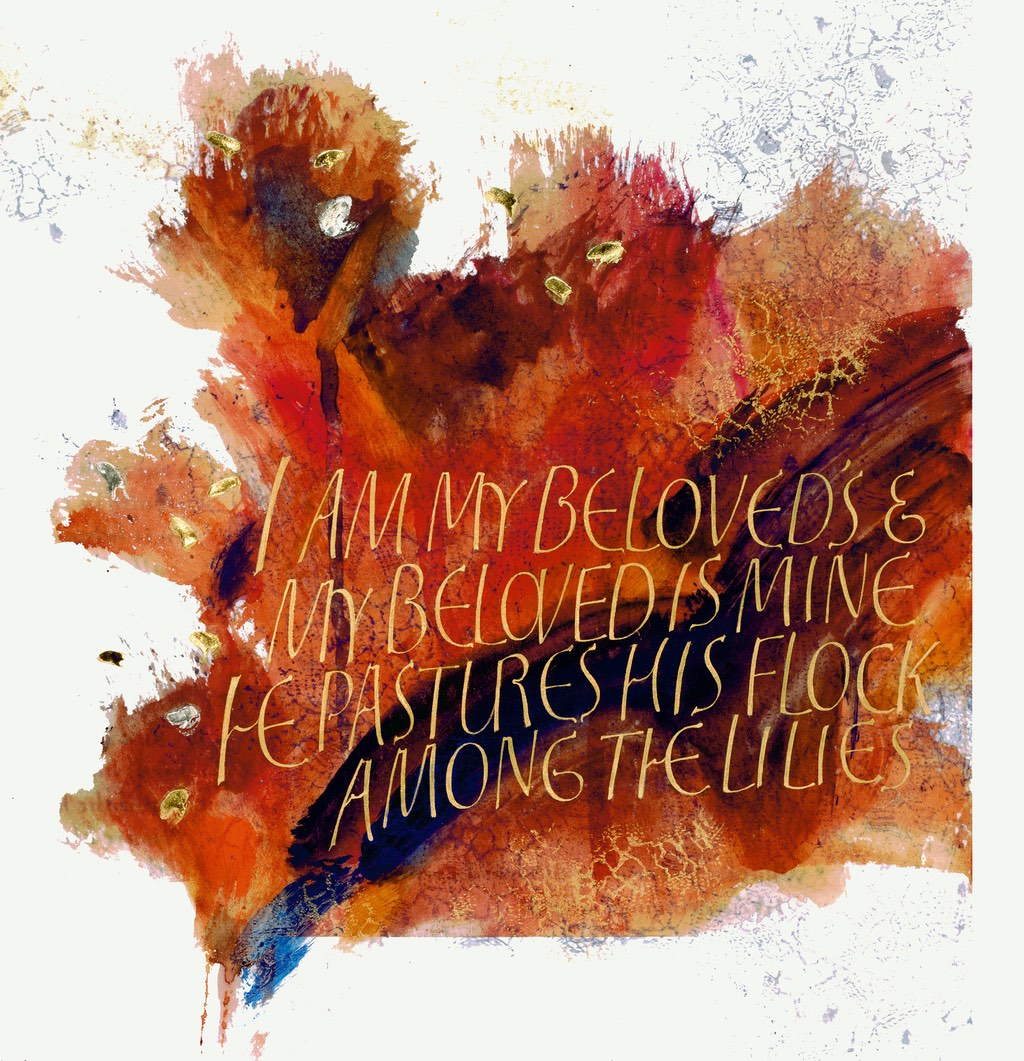 The Saint John's Bible Heritage Edition is housed in the Allison Library Rare Books Room. A volume is also on display in a custom case in the library foyer; a new page is turned each day.

About The Heritage Edition

Regent is fortunate to receive the gift of a Heritage Edition—one of only 299 hand-finished, limited edition sets in existence; each is numbered and initialed by the creative director, Donald Jackson. Jackson also directed the making of the Heritage Edition throughout the entire process to assure its fidelity to the original and he approved every page before final printing. Correspondence to the original is so important that even the “show-through” caused by transparency in the vellum is captured on the pages of the Heritage Edition. The paper of the Heritage Edition is designed specifically for this project and the weight and feel of the cotton pages approximate that of the vellum used in the original manuscript. After printing, gold and silver foils are applied using a series of stamping and embossing processes. In places where results cannot be achieved through mechanical means, Jackson’s studio manager, Sarah Harris, has hand treated the illuminations. Therefore, no two Heritage Edition sets are identical.

For more information about the Heritage Edition, click here 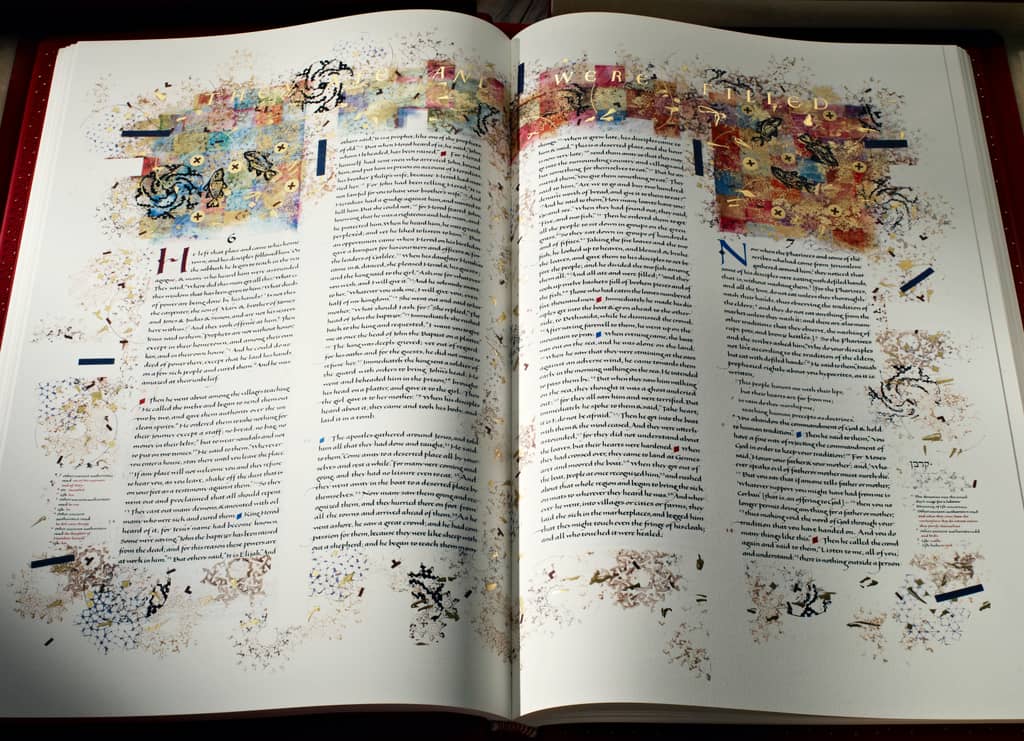 The Word Come To Life: An Exhibition of The St. John's Bible at the Dal Schindell Gallery

See The Heritage Edition In The Allison Library 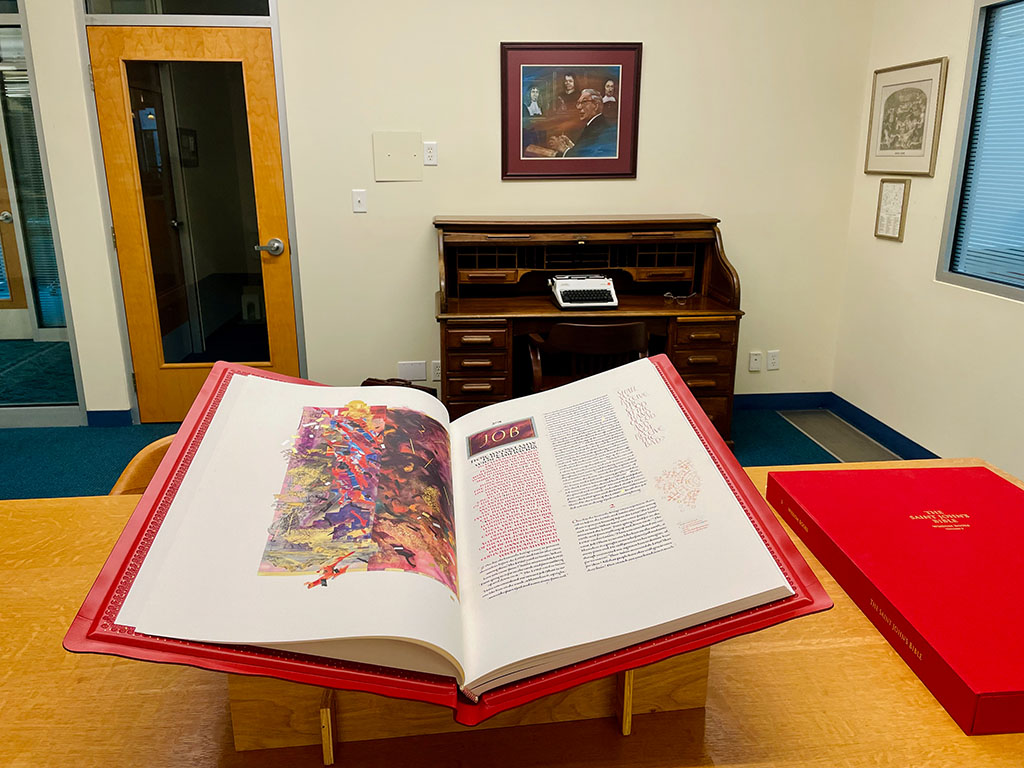 The Heritage Edition in the Allison Library is a full-size fine art edition of The Saint John's Bible. Bound in Italian leather, the Heritage Edition features the exquisite calligraphy, vibrant imagery and stunning gold and silver illuminations inspired by the original.

A volume of The Saint John's Bible Heritage Edition is always on display in the Library foyer; however, Regent students and visting scholars have the opportunity to view this limited-edition work of art up close by booking a viewing session in the Library Reading Room. Prior to booking it may be helpful to view a summary of each volume or view each volume digitally.

BOOK A SESSION WITH THE SAINT JOHN'S BIBLE 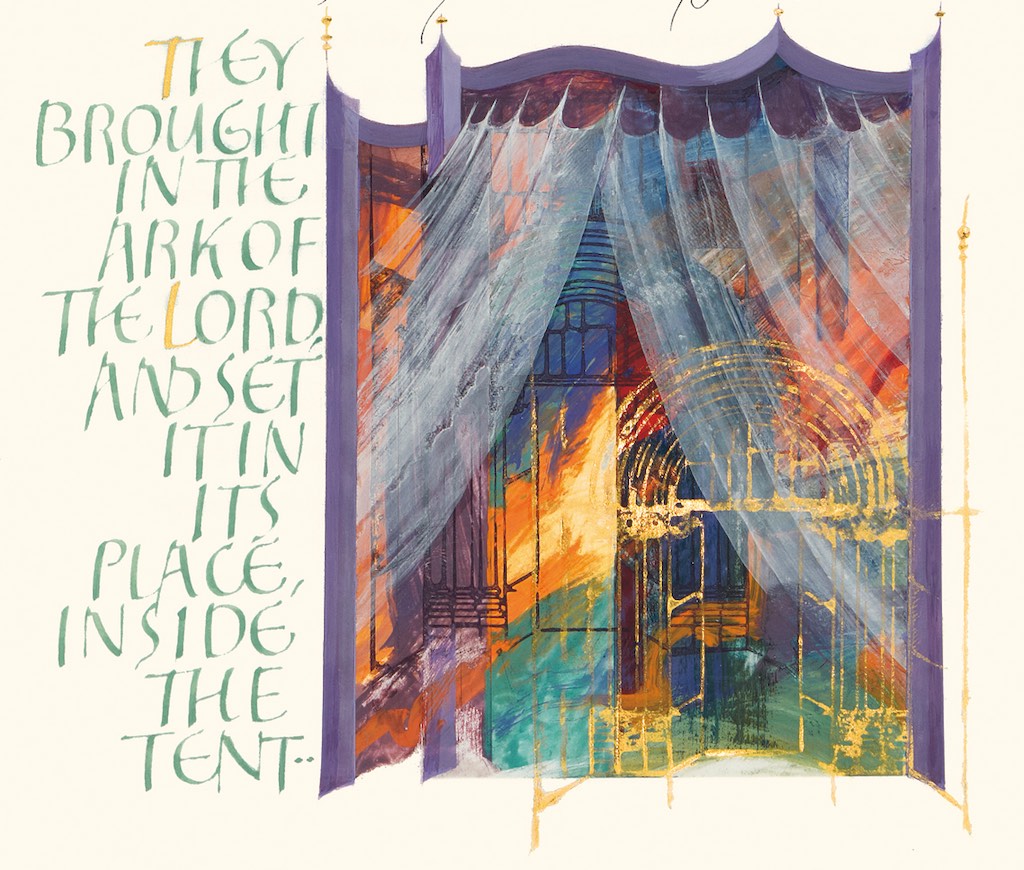